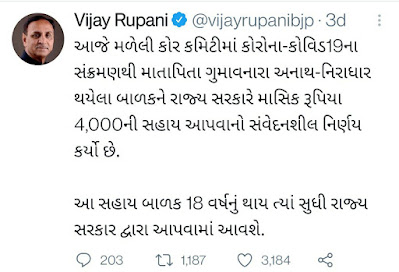 The state government will provide assistance of Rs. 4000 per month to the orphaned child who has lost his parents due to Koro infection. This assistance will be provided by the State Government till the child reaches the age of 18 years. 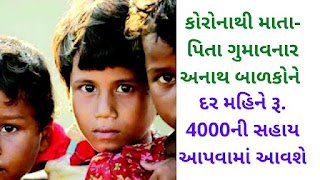 Corona has slowed down a bit in the state in the last few days. New cases of Corona are being registered around 11,000. The recovery rate has also gone up to more than 80 per cent and the number of patients recovering from corona against new cases is increasing day by day while the death toll has also come down to around 100.
The state government has taken an important decision to take the children who lost their parents’ umbrella to corona during this epidemic. The government has announced a monthly allowance of Rs 4,000 for an orphaned child until he turns 18. The decision was taken and announced in a core committee chaired by Chief Minister Vijaybhai Rupani.
Important Link
Read News Source in Gujarati
The number of new cases has also remained stable in Gujarat as the pace of corona has been slowing down and 11016 new cases were registered in the last three hours on Wednesday. While the death toll has been steadily declining, 108 deaths were reported in the last four hours. However, more than 200 patients are still on ventilators in the state.
← Previous Post
Next Post →